Are aliens planning on invading earth?

Sounds like a India TV news Article doesn’t it? Well it is true. Our sources in Kirkit Land (Yeah the same in mentioned in the Hitchhikers Guide to the Galaxy and yeah we have sources everywhere in the universe) inform us that after the intergalaxial peace treaty was signed 1111 years back, they had been creating a weapon of mass destruction. The weapon would not kill the person directly but would demoralize him/her to the extent that he is totally defunct. Considering that shipeverythingtoSA Roadie has already set the wheels in motion, it is no wonder that they would be very close to invading anytime soon.

Our sources tell us that one prominent member of the cricket fraternity has already been identified as an alien of the Kirkit race. 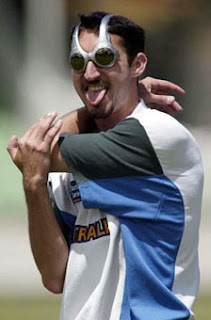 With his mask off, it is very difficult to identify the adopted face but it is said that the alien can take on any face it sees.

We have received a detailed plan how they intended to do the same, through a coded message intercepted through the intergalactic postal service chain in which we have a source. The message shown below was cracked with a top level crack team of specialists from BBI (Bureau of Bakwaas Investigation) and DICK (I don’t think I need to explain this).

What strange is, that Inzoo figured out the message at one glance which the team of specialists couldn’t for 3 months. The message said “D.E.S.T.R.O.Y. C.R.I.C.K.E.T.” . One wonders at such points in time whether Inzoo really is from earth and is as dumb as he shows?

Some of the diagrams shown were mind boggling in their ridiculous callousness and severity. Would the aliens go to any levels to destroy the human race? 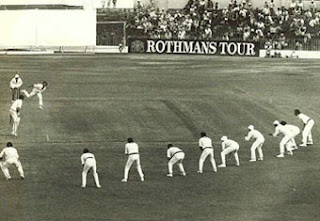 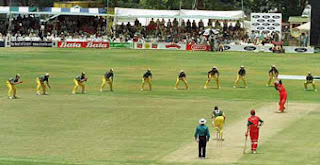 One really questions in this context, the issue brought up by the genius intellectual “coach” John 4-captains-and-a-nun and hot and sexy .. highly metrosexual Khaorukke Paan about the Mutiple captains. With a “setting” like this, do we even need a captain, no offense Mr. Gang(rape)-ho-lee. Specialists asked to analyse this reported with a detailed analysis comprising of as many as 3 words –

Though the usage of moderate of words in this blog does not convey the urgency of matter, it is imperative on our part to understand that this is of prime importance to save our race from extinction. The aliens have also found out the secret to the importance of the sport in our life.

A secret book passed on from prime minster to minster in this country reveals that only humans can play this sport. Chimpanzees the only creatures humans can bank upon in the event of a total wipeout, cannot play the “bat and ball” sport!!! But more on that in the next post